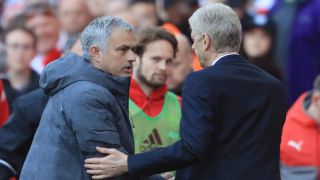 Arsene Wenger broke his personal curse against Jose Mourinho after his Arsenal side triumphed against the Portuguese for the first time in the Premier League, but the Gunners boss was not in a boastful mood.

Arsenal have won four of their last five games in all competitions since Wenger switched formation to a back three, but they remain sixth in the table, narrowing the gap on fourth-placed Manchester City to six points.

Wenger was keen to play down his historic result against Mourinho after leading Arsenal to their first Premier League win in 13 attempts against the Manchester United manager, who he had previously only beaten in the 2015 Community Shield.

"We have had many draws as well and there were some fantastic teams that we played against," Wenger, who has endured a long and often heated rivalry with Mourinho across his spells at Chelsea and United, told Sky Sports.

"It is not manager against manager. Sometimes it happens where you are less successful with some than others.

"It was a patiently built win where in the first half you could see we were a bit nervous, in the second half we took the edge off and scored the goals. It was a good win.

"[The back three] gives us more defensive stability because we had a spell where we conceded too many goals. It is not all perfect, but we are more defensively focused than we were a month ago."

Arsenal can put further pressure on the top four in the race for Champions League qualification when they play Southampton on Wednesday, but Wenger accepted the odds are still against his side.

"We still have a mathematical chance, but we need some help," added the Frenchman, who was again asked about his future.

"The best help we can get is by winning our own games. We'll focus on Wednesday, thank you."