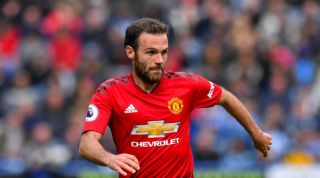 Mata made only his sixth Premier League start of the season in Saturday's 4-0 thrashing of Norwich.

The Spanish playmaker registered two assists, with Marcus Rashford (two), Anthony Martial and Mason Greenwood all getting on the scoresheet.

And Mata says he relished playing alongside the three attackers as United kept within five points of Chelsea in fourth place.

"It was very nice to play today,“ he told MUTV. ”We found spaces, we found the pockets and we could play some balls into our strikers all over the pitch. I think that is a good sign.

"It is very nice for a player like me to play with these kind of players. They make runs and you can play the ball either into their feet or in behind and create a good ball into a goal. That is important to us as playmakers.

“It was one of the moves we did in training,“ Mata said of the first goal, which he set up with a cross for Rashford.

”When I play on the right and come inside, I like to make those crosses for our strikers and it was a good finish from Marcus. We are happy with that. We felt we could do it and we did it.

“It was one of those days I enjoyed being on the pitch and we all did. I think the fans will be happy.

"That is important for us because, we have to be honest, we have given them some disappointments this season that they don’t deserve. But I think, today, they will be happy and that is important to me.

"It was a good performance and a performance that we needed. It is a performance we can look at and see how we can play and make sure we play like that on a more consistent basis.

“Norwich are a team that tries to play out from the back and they dare to play that way. They have personality. I like the way they try to play, obviously they are not getting results because this is the Premier League but if you don’t have a good day they can play, have the possession and they can create chances like the one they had in the first half that David [De Gea] made a great save from.

“What we tried to do was get the ball as soon as possible and control the game and to create chances. We did that from the first minute. There were four or five minutes at the end of the first half when we lost our concentration a little bit but, overall, it was a very good half and one of the best of the season. It was a complete performance and we need to keep that going and relax in every game.

“But it is only one game, it is only three points but the feeling was very good. What we have to try to do is bring that feeling for the next game against Wolves [in the FA Cup replay on Wednesday night] and in the Premier League against Liverpool at Anfield [next Sunday], which is a big one.

“We have to keep going. Days like today make you happy and that is what we have to do.”