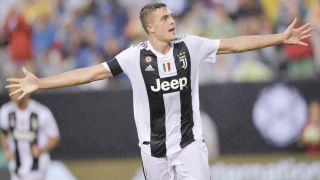 Andrea Favilli announced himself with a first-half brace as Juventus defeated Bayern Munich 2-0 in their International Champions Cup opener.

Joao Cancelo, Mattia Perin and Emre Can were making their Juve debuts in Philadelphia on Wednesday, however, Andrea Favilli stole the show.

Signed from Ascoli, Favilli broke the deadlock in the 32nd minute after Sven Ulreich's failed to deal with a poor back-pass from team-mate Josip Stanisic at Lincoln Financial Field midweek.

The 21-year-old then doubled the lead in cool fashion eight minutes later to condemn Niko Kovac to his first defeat as Bayern head coach since replacing Jupp Heynckes in the off-season.

Bayern – who defeated Paris Saint-Germain 3-1 in their ICC opener – fielded the likes of Franck Ribery, Javi Martinez, Juan Barnat and Serge Gnabry in the line-up, with Arjen Robben, David Alaba, Kingsley Coman and Renato Sanches on the bench.

It was a lively start despite the wet conditions as Ulreich was forced into an early save – the back-up keeper managing to get a strong hand to keep out Favilli's powerful attempt.

Perin enjoyed a relatively comfortable half, though the former Genoa star was called into action to deny Ribery, who showed some nice foot work to create space to unleash a fine curling effort four minutes later.

Bundesliga holders Bayern began to take control as the half wore on, with Juve surviving a couple of goal-mouth scrambles, however, it was the Italian champions who opened the scoring just past the half-hour mark.

A poor back-pass from Stanisic put Ulreich under serious pressure and Marchisio pounced on the wayward return ball, picking out Favilli and the new signing side-footed the opener with the German shot-stopper caught off his line.

Bayern were forced into a substitution with Martinez – who has endured an injury-ravaged career – replaced by Alaba following a collision with Favilli.

Favilli was in the thick of the action again five minutes prior to the interval when he sprung the offside trap after Sandro's long ball and finished coolly beyond Ulreich.

The only concern for Juve from the first half was Can's withdrawal two minutes before the break.

Bayern substitute Woo-Yeong Jeong should have reduced the deficit just shy of the hour-mark but the Korean teenager somehow blazed over the bar with the goal at his mercy.