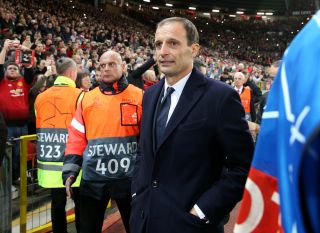 Massimiliano Allegri will leave his position as Juventus head coach at the end of the season, the Serie A club have announced.

The 51-year-old has been in charge of the Turin side since joining from AC Milan in 2014 and he has won the Italian league title in each of his five seasons in charge.

Allegri had a year remaining on the contract extension he signed in 2017 but he will not see it out as the Bianconeri continue in a different direction.

A club statement read: “Massimiliano Allegri will not be on the Juventus bench next season 2019-2020.

“The coach and the president, Andrea Agnelli, will meet together with the media at the press conference, which will be held tomorrow, Saturday, May 18.”

Allegri’s trophy haul in Turin also includes four Coppa Italia titles, with this season being the only time during his reign that Juventus have not secured a domestic double.

Despite success on home soil, Allegri was unable to deliver the biggest prize in European club football, losing two Champions League finals – against Barcelona in 2015 and Real Madrid in 2017.

The quarter-final exit against Ajax this season was a huge disappointment after signing Cristiano Ronaldo last summer for a fee reported to be 100million euros.

Former Juventus player and coach Antonio Conte is among the early favourites to replace Allegri.