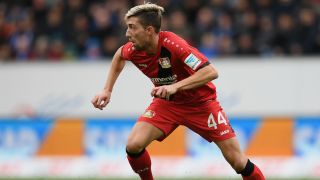 Kevin Kampl has signed a four-year deal with RB Leipzig after calling time on his stay at fellow Bundesliga club Bayer Leverkusen.

The Slovenia midfielder has signed for a reported €20million, boosting coach Ralph Hasenhuttl's options ahead of the club's maiden Champions League campaign.

Kampl, 26, has been capped 25 times by his country and has also had spells with Red Bull Salzburg and Borussia Dortmund.

He is on international duty ahead of Slovenia's World Cup qualifiers against Slovakia and Lithuania, with his Bundesliga debut likely to come at Hamburg on September 8.

BREAKING: have signed from on a four-year-deal ✍️Welcome to Leipzig, Kevin! August 31, 2017

Kampl is set to play alongside Naby Keita, who has agreed to join Liverpool in 2018.

Leipzig, who recovered from their Bundesliga opening-day loss to Schalke by beating Freiburg last time out, face Monaco, Besiktas and Porto in Champions League Group G.