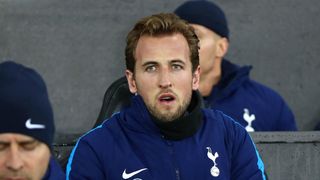 Mauricio Pochettino is hopeful Harry Kane can return to the starting XI when Tottenham host West Ham on Thursday.

Kane concluded a stellar 2017 by breaking Alan Shearer's record for the most Premier League goals in a calendar year and outscoring Barcelona superstar Lionel Messi for club and country over the 12-month period.

The 24-year-old England striker was laid low by illness before Tuesday's 2-0 win at Swansea City and featured as a second-half substitute after understudy Fernando Llorente opened the scoring.

"Yes, we'll see [if he will be fit to start]," Pochettino told reporters.

"Our decision was good because you can see on the pitch it was difficult to run after a few days with antibiotics.

"We hope that now it is going well and he will be ready for West Ham. We need to see him and decide."

Kane scored twice as Spurs won 3-2 at London Stadium in September but they were stunned by the same scoreline at Wembley a month later when West Ham came back from 2-0 down to triumph in the EFL Cup.

"It's not [about] revenge, it's a game that is so important for us," Pochettino said.

"The problem was that it was 2-0 in half-time and we all, and I need to include myself in this, believed that the game was over. That was our massive mistake.

"And it's so important to get all three points. It's a derby and it's special."

Pochettino added: "I think it will be a very tough game because West Ham are improving a lot with David Moyes. And always in a derby, the games are always difficult."