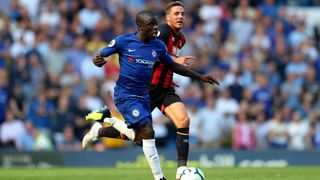 N'Golo Kante knows Chelsea are counting on him after receiving offers to leave Stamford Bridge over the close season.

Two-time Premier League winner Kante helped Chelsea to the title in 2016-17, having starred in Leciester City's unlikely march to glory in the previous campaign.

The major honours continued to roll in for the holding midfielder as he anchored France on their way to World Cup glory this year, with those performances heightening speculation Paris Saint-Germain were keen to sign the 27-year-old.

But Kante was offered assurances over his importance under new Blues boss Maurizio Sarri, who has deployed him in a roving central role this season to fine effect.

"There was no urge to go anywhere else after the World Cup," he told RMC Sport.

"There were other clubs interested but, after talking to Chelsea, things were clear.

"The club is counting on me and I feel good. The next logical step was to continue at Chelsea."

Chelsea have won four out of four in the Premier League so far this term and host winless Cardiff City on Saturday.