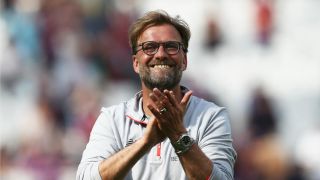 Jurgen Klopp hailed a "perfect" day for Liverpool as his side moved back up to third in the Premier League and boosted their Champions League hopes by battering West Ham 4-0 at London Stadium on Sunday.

Daniel Sturridge gave Liverpool the lead after racing on to a smart Philippe Coutinho throughball, with the Brazilian then adding two goals of his own in the second half, before Divock Origi completed the scoring.

A fourth successive away league victory extended Liverpool's cushion to four points from fifth-place Arsenal and the Reds will guarantee a spot in next season's Champions League with a win over Middlesbrough at Anfield in their final game of the season.

Klopp was delighted with his team's performance against a below-par West Ham side, crediting Andre Ayew's miss late in the first half - the forward somehow hit the post twice from close range - as a key moment.

"Looking back now, it was hard work, and there were a few moments where the game could have changed," Klopp told his post-match news conference. "I thought we had a real deserved win, it was a really good football game.

"The start was not that good, we changed system obviously and the one thing that is then new is a little bit of the situation on the wing. The big chance they had at the second post area, we did not do that well in this moment. But they couldn't score, then we controlled the game, then we scored the goal and we had another big chance with the header.

"We were the dominant side, but they had absolutely one of the biggest chances I've ever seen in my life. They didn't score so that was a lucky moment for us. The start of the second half was brilliant, we played really good football and we were more direct and used the information from the first half and from half-time.

"We [tried] a few different moves, a few different surprising movements and [had] better timing in passing and running. It's easy to say and much more difficult to do but the boys did really brilliant. We scored the goals, controlled the game, could have scored more often but that's completely OK that we didn’t. A perfect afternoon."

An important double. A very well-deserved pat on the back from the boss! May 14, 2017

Coutinho excelled in a deeper midfield role than his usual position off the lone central forward and Klopp suggested he could use the 24-year-old, who was involved in three goals in a game for the first time at Liverpool, there again.

"I can't remember when I said this but it was always clear Phil can play this [position], there's no doubt," Klopp added. "If he starts on the wing, he is very often in this position. He was never a winger, he's always kind of a playmaker.

3 - Philippe Coutinho has been directly involved in three goals in a single game for Liverpool for the first time. Exceptional.May 14, 2017

"It's not interesting where he's coming from it's all [about] where he needs to be at one point. He needs to be in the decisive area in the middle of the park, he needs to be in shooting situations and all that stuff. That's what he did today - obviously he felt really well in this position and that was a good game."