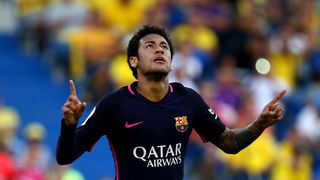 A Neymar hat-trick ensured Barcelona kept the pressure firmly on Real Madrid in the La Liga title race with a 4-1 victory over Las Palmas that keeps Luis Enrique's side top of the table.

The Spanish giants are locked together on 87 points after Sunday's clashes – Madrid beating Sevilla by the same scoreline at the Santiago Bernabeu – but the capital club remain favourites owing to their game in hand.

Given Madrid's advantage, Barca needed to take all three points in Gran Canaria and goals from Neymar and Luis Suarez got them off to the flying start.

Lionel Messi was denied a third by a Mauricio Lemos block and Barca saw their lead halved when Pedro Bigas started and finished a flowing move after 63 minutes.

The hosts' hopes of a comeback were dashed soon after, though, as Neymar restored Barca's advantage before completing his hat-trick with a neat finish under Javi Varas.

Victory means Barca must beat Eibar on the final day and hope Madrid lose to either Celta Vigo – their game in hand – or Malaga to be crowned champions, Luis Enrique's side having a better head-to-head record should they remain level on points.

3 - Neymar has scored his first away hat-trick for Barcelona in all competitions. Samba. May 14, 2017

Barca – who lost Javier Mascherano to injury in the warm-up – could have been ahead inside six minutes as Messi played a smart ball across the Las Palmas six-yard box, but Suarez was unable to convert at the back post.

The visitors were then lucky not to be reduced 10 men as Lucas Digne dragged back Jese Rodriguez, the defender only shown yellow much to the relief of Luis Enrique.

Suarez laid the first on a plate for Neymar to tap into an unguarded net and the Brazilian returned the favour moments later with a sumptuous pass for the Uruguayan.

In behind the Las Palmas defence, Suarez made no mistake as he deftly lifted the ball over the advancing Varas.

Their advantage should have been three just before the hour as Messi played a neat one-two with Jordi Alba, but the Argentina international saw his shot – which looked destined for the top corner – blocked by Lemos.

Having survived that danger Las Palmas got back into the match as Bigas netted his fourth of the season, the defender intercepting in his own penalty area before surging forward to convert Kevin-Prince Boateng's low cross.

Thoughts of a turnaround were quickly banished when Neymar completed his hat-trick with two goals in four minutes.

His second of the night came as he headed home Ivan Rakitic's cross at the back post, the 25-year-old grateful Suarez's lunge at the ball from an offside position failed to connect.

And he was soon celebrating his treble as he latched onto a beautifully weighted pass from Alba and rolled the ball underneath Varas to complete a comprehensive victory, with Barca now hoping for a favour from Celta Vigo, who face Madrid on Wednesday.