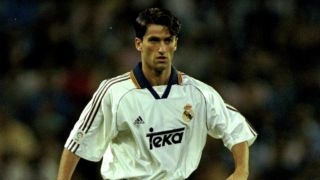 Panucci won LaLiga, the Supercopa de Espana, the Champions League and the Intercontinental Cup during his three-year spell in Madrid before moving to Inter, where he struggled to recapture his form and fell out with then coach Marcello Lippi.

The 45-year-old gave a positive assessment of Ronaldo's prospects in Serie A following his €112million move to the champions, but indicated that the Portugal icon might live to regret his decision to leave Madrid.

"When I left Madrid I was convinced," Panucci told El Partidazo de COPE.

"I wanted to leave Madrid and it was the biggest foolishness of my sports career, and I regret it now.

"Cristiano is going to win because he is too good a player not to do it. It's normal madness for Cristiano, he's the best in the world.

"He's a very smart signing who is going to give other great players a push to come to Italy.

"Being a champion is in his blood."

Panucci said that Madrid could be facing a tricky period of transition in the aftermath of Ronaldo's departure, which followed the replacement of three-time Champions League-winning head coach Zinedine Zidane with Julen Lopetegui.

Zidane failed to retain the LaLiga title in 2017-18 after winning it a season earlier, but Panucci said the Frenchman would nevertheless be hard to follow.

"It could be a difficult season for Madrid," he said.

"Zidane is leaving, Cristiano is leaving. It's not easy to substitute them and more after winning three Champions Leagues in a row."