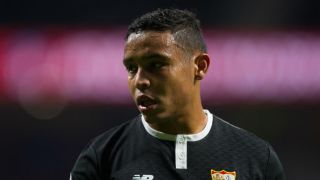 Leganes kept their hopes of reaching the Copa del Rey final for the first time alive by coming from behind to draw 1-1 with Sevilla in the semi-final first leg at Butarque.

Asier Garitano's side, who sit 11th in La Liga, beat Real Madrid to reach the semi-finals but were slow to get going against Vincenzo Montella's in-form Sevilla team.

Luis Muriel put the visitors ahead with his seventh goal of the season but Leganes centre-back Dimitrios Siovas headed a fortuitous second-half equaliser to leave the tie in the balance.

Sevilla's Ever Banega fired a warning shot after 10 minutes, dragging the ball across the face of goal with a low right-footed shot.

The deadlock was broken after 20 minutes when Pablo Sarabia's angled pass sent Muriel into the box and he beat Nereo Champagne with a well-placed low shot into the far-left corner of the net.

A defensive lapse allowed Claudio Beauvue a free shot at goal after 33 minutes but the Guadeloupean winger looped his shot over the crossbar from 20 yards.

Joaquin Correa tried an audacious lob from 35 yards five minutes before the break but his shot flew just wide with Champagne stranded, and the Leganes goalkeeper made a one-handed save to deny Clement Lenglet moments later.

The second half was 10 minutes old when Sevilla failed to clear their lines at a corner and the ball looped into the air before Siovas nodded home past Sergio Rico from close range.

Leganes threw men forward in the final quarter of the game to try and force a goal they know will be hard to come by at Ramon Sanchez Pizjuan in the return tie but Unai Bustinza headed Javier Eraso's cross wide as their home advantage went to waste.