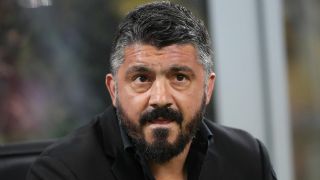 Milan only signed Gattuso to a three-year deal in April and Leonardo has no intention of parting with the 40-year-old just yet.

"My view is shared by the club, Gattuso was the first to be confirmed, this has never been up for discussion," said Leonardo, who arrived in Milan as the Serie A club continued to overhaul its senior hierarchy under new owners Elliott Management.

"It's normal that these things happen when great coaches are available, but none of us have talked to Conte.

"Gattuso has grown as a coach, he's a Milan man and we'll go from there."

Gattuso was promoted from his role as head coach of the Primavera team to replace Vincenzo Montella in November.

He went on to lead Milan to a sixth-placed finish in Serie A last season, enough to qualify for the Europa League.