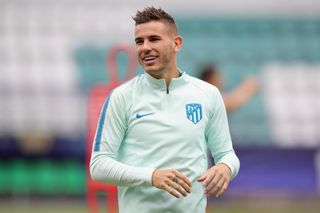 Bayern Munich coach Niko Kovac refused to rule out a move for Atletico Madrid defender Lucas Hernandez, playfully suggesting the club will wait to see "what baby Jesus" brings them over Christmas.

On Wednesday, Lucas was the subject of rumours in the Spanish media claiming he was closing in on a move to Bayern in January.

The story said Bayern were willing to trigger the France international's reported €80million release clause, though an Atletico statement soon dismissed the claims.

Kovac was asked about the potential transfer in his news conference on Friday, and is confident Bayern will strengthen in January if needed necessary.

"As Brazzo [sporting director Hasan Salihamidzic] said, if we think we can strengthen the club, then we will do something," Kovac told reporters.

"But it must be all right, we will know more at the end of the transfer window. We always need quality, but we have some.

Niko finishes the final press conference of 2018 with a festive greeting: "Merry Christmas and a Happy New Year!" December 21, 2018

"Let's wait and see what baby Jesus has got for us. I'm happy with the team - if there is one more, it will be one that brings quality."

Bayern's next outing sees them come up against Kovac's former club Eintracht Frankfurt and two players they have been linked with, in Luka Jovic and Ante Rebic.

Kovac admires both, particularly Jovic, but would not expect Frankfurt sporting director Fredi Bobic to let them go easily.

"These are two really good players, and have also proven this internationally," Kovac said. "If Luka stays on the same path, he will be a world class player.

"He is one of the best players in Europe in his age group. Left foot, right foot, heading, he can do it all and is a complete player.

"But, we already have good players and Fredi [Bobic] has his plans this year, he will not just give anyone."