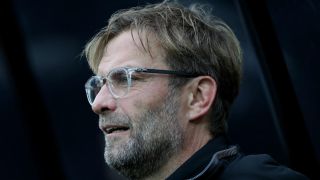 The visit of Manchester United to Anfield on Saturday could make or break Liverpool's season, according to Jamie Redknapp, who feels Jurgen Klopp may soon find himself under mounting pressure.

The Reds go into the crunch fixture against their fierce rivals seventh in the Premier League table, already seven points behind the joint leaders and with memories of a humiliating 5-0 loss to Manchester City last month fresh in the memory.

They have only won once in the last four league games and former Reds midfielder Redknapp pointed out that Klopp has done little better this term than his predecessor Brendan Rodgers, who was sacked in October 2015 with the team 10th in the table.

"It's the sort of game that, for Liverpool, it can turn your season around," the ex-England international told Omnisport when asked about the keenly contested rivalry between Liverpool and the Red Devils.

"I've played in plenty of games against Man United when, if you win, it's a complete season-changer.

"If they lose... maybe the pressure starts to come on Jurgen Klopp a bit. I mean that in a nice way because... points to points, he's not much better than Brendan Rodgers, if not worse.

"It's an interesting game for him and it's a game you do not want to lose against Manchester United, at any time of the season."