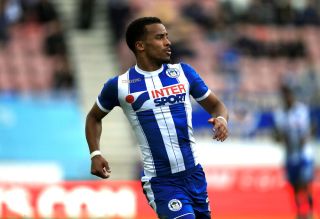 A 20-year-old man from Sheffield has been arrested after an offensive social media post was directed towards Wigan’s Nathan Byrne.

Lancashire Police said the man had handed himself in at Blackpool Police Station on Saturday evening and was subsequently arrested on suspicion of a racially aggravated public order offence and malicious communications.

“The man has since been released under investigation pending a charging decision by the Crown Prosecution Service (CPS),” a police statement said.

A man has been arrested following an incident where a racially offensive message was sent to a Wigan Athletic footballer on Twitter. More details here: https://t.co/rz7g24dv3xpic.twitter.com/xCLP7XC0j3— LancsPolice (@LancsPolice) April 8, 2019

Wigan’s Byrne had posted a screenshot on his Twitter account of a sickening message he received following the Latics’ 2-2 draw with Bristol City at Ashton Gate.

The incident was one of several over a weekend that “saddened, disappointed and angered” the English Football League.

Brentford said they “utterly condemn discrimination” after a season-ticket holder was arrested following a claim of abuse directed at Derby midfielder Duane Holmes, while Northampton said several members of their first-team squad were allegedly abused prior to their match at Notts County.

The spate of incidents – following on from those involving Juventus’ Moise Kean and England’s match in Montenegro – has led to calls for players to abandon a match if there is any racist abuse.

However, former Watford striker Danny Webber believes that could have only a limited impact and says education offers the best long-term solution.

He told BBC One: “I agree with walking off the pitch. That’s the first point, everybody making a stand and making everybody aware. But if it continues into the next week then it’s not really made much of a difference.

“I think you’ve got to get a think tank of people together – that’s from schools, nurseries, the football industry, other industries, men, women and people from every background – to try and think of a way to tackle it because it is about education. Because I don’t believe anyone is born racist.

“My dad would say, ‘answer them on the football pitch’, like Kean did for Juventus. He scored and that was his answer. OK, that was the way to do it.

“But beyond that, how do you deal with the little splinter groups who are within the crowd? They need to be banned and enforcement needs to take place, but the whole situation can be abused.

“You can get rival fans who will abuse a player to gain an advantage for their team… and when you start talking about points docking it becomes very difficult.

“What are your choices? Players need to have more choices. At the moment your choices are to walk off the pitch, suffer it or answer on the pitch. So everybody needs to come together as a collective.”