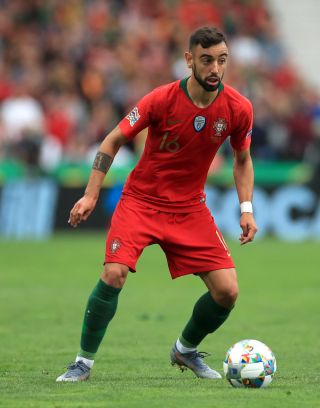 Manchester United have agreed a deal with Sporting Lisbon to sign Bruno Fernandes as their long-running pursuit of the Portugal midfielder nears a conclusion.

United confirmed a deal was in place, subject to a medical and personal terms, a day after making a significant breakthrough in talks with Sporting over a fee for the 25-year-old, who is Ole Gunnar Solskjaer’s number one target in the January window.

“Manchester United is delighted to announce it has reached agreement with Sporting Clube de Portugal for the transfer of Bruno Fernandes,” a club statement said. “A further announcement will be made in due course.”

United will pay an initial 55 million euros (£46.6million), with a further 10 million euros (£8.5million) dependent on Champions League qualification and appearances by the player.

Fernandes has 19 caps for Portugal and helped them win the Nations League last summer.

The final bill could rise by a further 15 million euros (£12.7million) based on a number of further clauses based on Fernandes’ achievements over the long term.

United are expected to give a four-and-a-half year deal to Fernandes, who will boost a midfield short on numbers following the departures of Marouane Fellaini and Ander Herrera, as well as long-term injuries to Paul Pogba and Scott McTominay.

“Some are born great, some achieve greatness, and some have greatness thrust upon them".— Sporting Clube de Portugal (@Sporting_CP) January 29, 2020

They will be signing a player who has scored 64 goals in 137 appearances for Sporting since joining from Sampdoria in 2017.

The 20-year-old, who missed Southend’s 3-1 defeat to Doncaster on Tuesday night as he had a medical with an unnamed club, will join United’s development squad if a deal is concluded.

Bishop, a member of the England Under-20s squad at last summer’s tournament in Toulon, has made 39 appearances for Southend since making his debut in December 2017.

As they close on two signings, United could still move on some players in the final hours of the transfer window.

Solskjaer on Tuesday played down suggestions that Marcos Rojo was close to joining former club Estudiantes on loan, but it is understood a deal remains a possibility.

Rojo, 29, has made only nine appearances for United this season.