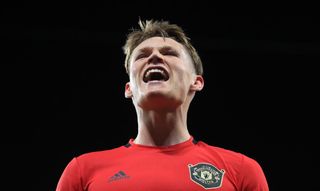 Scott McTominay could make his return when Manchester United face Watford in the Premier League this weekend.

Out since Boxing Day with a knee injury, the Scotland international is back in full training and Ole Gunnar Solskjaer says the midfielder might be in the squad on Sunday.

Mason Greenwood will be checked after missing the midweek Europa League clash with Club Brugge through illness. Axel Tuanzebe and Phil Jones trained ahead of the trip to Belgium but did not make the United squad, while Paul Pogba (ankle) and Marcus Rashford (back) remain long-term absentees.

Watford have an almost fully-fit squad after Kiko Femenia and Ismaila Sarr returned to training.

Femenia has been out since New Year’s Day with a hamstring injury and Saar has been sidelined for a month.

Daryl Janmaat is therefore the only absentee but he too is closing in on a return after a knee injury.