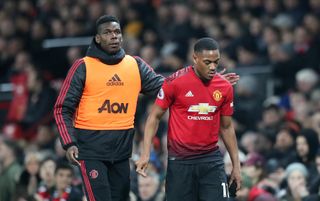 Injury-hit Manchester United could be without seven first-team players against Leicester, with Paul Pogba and Anthony Martial among those ruled out by Ole Gunnar Solskjaer.

Returning to winning ways against Brendan Rodgers’ in-form side at Old Trafford looked a tough enough task without a lengthy injury list that threatens to derail their afternoon.

Luke Shaw, Diogo Dalot and Eric Bailly remain sidelined, while Martial continues to be laid low with a thigh issue and Pogba has yet to recover from an ankle injury.

Aaron Wan-Bissaka and Jesse Lingard are doubts after withdrawing from the England squad with a back complaint and illness respectively, leaving Solskjaer with a selection headache.

“Well, the treatment room’s been busy and still is,” the United manager said. “So, we don’t really know who is going to be available.

“There’s maybe Aaron, maybe Jesse and I think maybe that’s it from the ones that had to pull out, but I can’t promise those two will be available either.

“Leicester is always a tough game as a team, a club wanting to push into the top four. They’ve got good players, a very good manager, a proven top manager.

“So, Brendan’s teams always play good football and we know we’ve got to play well to deserve the three points.”

Pogba’s absence looks a particularly big blow for United given the ongoing question marks over the midfield.

Only Manchester City star Kevin De Bruyne has created more chances in open play this season than the World Cup winner, who pulled out of the France squad with an ankle issue sustained in the 1-1 draw at Southampton before the international break.

“Pogba won’t be fit, no – unless he’s had a miraculous recovery overnight from yesterday to today or maybe from tonight until tomorrow,” Solskjaer said.

“He’s not been ready to do 100 per cent training, no. We hope more can be ready for West Ham next week, and Paul and Anthony are in that category.

🤣 Sounds like @Daniel_James_97 could be set for a very brief appearance on Saturday…#MUFC#MUNLEIpic.twitter.com/1GqN6q58LB— Manchester United (@ManUtd) September 13, 2019

“I think they’ll be ready for then and can’t say more than that, really.”

It certainly looks like David De Gea is in for a busy afternoon – a player who continues to be the subject of speculation as contract extension talks drag on.

“I want David to stay here,” Solskjaer added. “He knows that and David’s, for me, the best goalkeeper in the world.

“We’ve seen that over the years, and I hope that I can make sure that he’ll finish his career at Man United at the highest level.

“And hopefully… there’s been loads of talks, loads of discussions between David and the club and hopefully we can get it done.”

Keeping it tight at the back will be key and Harry Maguire will be desperate to keep his former club at bay.

Saturday’s match will be the first time the 26-year-old has faced former club Leicester since completing his £80million summer switch to United, becoming the most expensive defender in history.

“I think he’s been brilliant,” Solskjaer said. “I think he’s come into the dressing room, been a leader, he’s also obviously a leader on the pitch. You can see that.

Ole on @HarryMaguire93: "He's been brilliant. I think he's come into the dressing room, been a leader, he's also obviously a leader on the pitch, you can see that." #MUFCpic.twitter.com/36JUTeZljn— Manchester United (@ManUtd) September 13, 2019

“I’m sure he’s looking forward to playing against his old team, but now he’s here, he is going to be a big part of the future of this club.

“That’s why we know so much about Leicester as well because we watched him enough to know that he’s the guy we wanted, that’s why we spent the money we did on him. Leicester didn’t want to lose him.”

Asked if he is a potential United captain, the United manager said: “He’s definitely a character and personality that can be captain of a big club, yeah.

“In the dressing room he’s a leader both by performances, presence, stature and behaviour. He’s a character you’d say you’d like to follow. Some are technical leaders, some are leaders by voice, and he’s got the lot, really.”