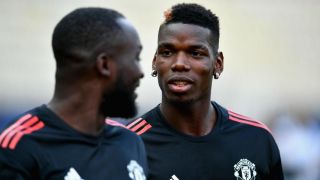 Manchester United travel to Dubai on Monday for a training camp following a hectic run of matches over the last month.

Jose Mourinho's side played five games in 14 days over the Christmas period, culminating in a 2-0 FA Cup win over Derby County at Old Trafford last Friday.

With their Premier League campaign not resuming until Stoke City's visit on January 15, Mourinho has taken the opportunity for a warm-weather break in the United Arab Emirates, where he hopes his fatigued players can recover while working on specific tactical plans for the coming months.

"We need to recover but at the same time we also need to train because, during this crazy time, we have not had many times to work on details that you want to work on," he told MUTV.

"It's been more about the recovery from the match and the travelling and the preparations for the next one without time to work.

"If we can have time to have a good, nice week to recover some injured players and tired players and, at the same time, work on some tactical details I think it would be good for the second part of the season."

United's game with Stoke is followed by a trip to Burnley on January 20. They then face Tottenham at Wembley 11 days later.