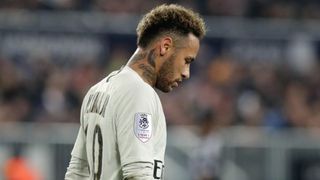 Paris Saint-Germain star Neymar is set to miss at least 14 matches as he recovers from injury, including the Champions League double-header against Manchester United.

PSG confirmed on Wednesday that the Brazil forward is likely to be absent for a further 10 weeks due to a foot injury suffered last week against Strasbourg in the Coupe de France.

For the second season running, Neymar will be absent for a key stretch of the campaign.

PSG have 14 matches before his potential return against second-placed Ligue 1 rivals Lille on April 13 and that number will increase further if Thomas Tuchel's men progress in the cup and in Europe.

We take a look at some of the key games Neymar is set to miss.

Although PSG crashed out of the Coupe de la Ligue to lowly Guingamp with Neymar available, they should have no issues in the Coupe de France against minnows Villefranche. However, with the quarter-finals set for the end of February and the semi-finals to take place in the first week of April, Neymar will still be absent against more testing opponents should PSG advance.

The big one. PSG tumbled out of last season's Champions League at the last-16 stage with a 5-2 aggregate defeat to Real Madrid as Neymar sat out the second leg with a foot injury, and they will fear a repeat against a rejuvenated United side. In a busy February, the loss of Neymar could well be felt keenly under the lights at Old Trafford.

We've been drawn against @PSG_inside in the @ChampionsLeague last 16. #UCLdraw

PSG will hope to still be in the tie when they welcome United to the Parc des Princes for the second leg and then it will be up to the likes of Kylian Mbappe and Edinson Cavani to star in their team-mate's absence. The French side did defeat Liverpool at home in the Champions League group stage, but Neymar was influential in that victory.

Neymar's injury last season came against Marseille in February, but he will miss the second Ligue 1 Classique of the season this time around. Having lost 2-0 at the Stade Velodrome, Marseille will be keen for revenge and, with Dimitri Payet, Florian Thauvin and now Mario Balotelli, they have the quality to capitalise on Neymar's absence.