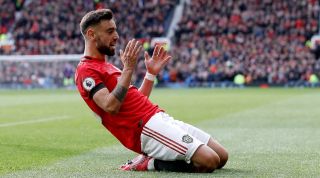 The win means United progress to the last 16 of the Europa League - the result continues their good run of form.

Ahead of kick-off at Old Trafford, ex-Manchester United midfielder Paul Scholes had his say on the club's new £47m signing.

"United's turnaround has coincided with Fernandes coming into the team as well," Scholes told BT Sport.

"They really lacked creativity and he seems to have linked the midfield and the forward line. He looks a really good player."

Scholes, who was lauded for his own ability to pick a pass, praised Fernandes' vision in the build-up.

"I think you can play him in that number ten role and in a deeper position as well. He has got so many strings to his bow. He has the type of vision that United have been missing."

Scholes was joined in the BT Sport studio by former Red Devil Owen Hargreaves, who compared Fernandes' ability to that of his fellow pundit.

"I think Scholes is the measure of a United midfielder," he said.

"I think he (Fernandes) is up there as United's best player right now. He is naturally gifted in terms of his weight of pass and he is a good finisher."

Manchester United now look forward to a clash against Everton at Goodison Park on Sunday as they continue to chase Champions League football.

Video: Watch Wolves' Pedro Neto miss the sitter of the season so far