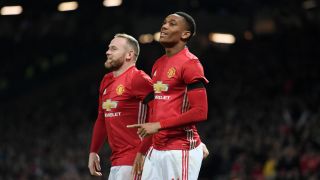 Manchester United will still be without Anthony Martial and Wayne Rooney for Thursday's Europa League match against Rostov due to injury, Jose Mourinho has confirmed.

The duo missed United's 1-0 FA Cup defeat at the hands of Chelsea on Monday and will not be fit in time to return for Thursday's encounter at Old Trafford.

Zlatan Ibrahimovic - who was suspended for the loss at Stamford Bridge - the only new face in the matchday squad.

"Martial was injured for the game against Chelsea and could not play," Mourinho said at a news conference.

"Rooney is still injured as well, some kick in his knee area, so he cannot even come out to the pitch. He stays inside the medical department.

"We will have the same players available as for the game against Chelsea, plus Ibrahimovic.

"It is a big boost to have Ibra for this game, but we never cry about who we have and who we don't have. He can play now and he cannot play the next game. That is not a problem."

United were held to a 1-1 draw in the first leg of the round-of-16 tie, with Aleksandr Bukharov cancelling out Henrikh Mkhitaryan's opener.