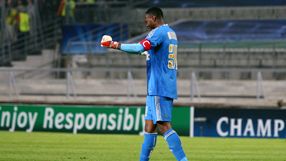 The French number two prevented the German champions from capitalising on any of their clear chances, denying Mario Gotze on several occasions with lightning quick saves.

Mandanda remains behind Olympique Lyon's Hugo Lloris in Laurent Blanc's national set-up but the France coach would have been encouraged by the goalkeeper's man-of-the-match display at the Stade Velodrome.

Asked what he thought of Mandanda's performance, Borussia coach Jurgen Klopp's grin gave away much more than his worded response.

"He is a very good goalkeeper," he said.

Mandanda showed quick reflexes to snaffle a chance when he dived at the feet of Gotze early on and in the 18th minute, spectacularly blocked the German midfielder's goal-bound attempt with his leg.

With Marseille leading 1-0 at half-time, Borussia stepped up a gear after the break and for a 15-minute spell, the hosts looked vulnerable at the back but Mandanda denied Gotze twice more.

"Mandanda was truly awesome. He is a great keeper and he proved it tonight," France midfielder Alou Diarra said. "He has the ability to pull great saves in the most important games."

Mandanda has overcome a slow start to the season and played himself into form, saving a penalty at Valenciennes in a Ligue 1 match last weekend to help Marseille avoid defeat.

Didier Deschamps' side may have only won once in eight league matches this season but they have started well in the Champions League with two wins from as many matches and team morale is improving.

"It's good to know we can rely on a great Steve," Diarra added.

"He is a great keeper. He has been saving us a lot of points lately," midfielder Charles Kabore added.

Mandanda, who was awarded a 9/10 ranking by French sports daily L'Equipe - a very rare score - opted to praise his team's overall performance rather than bask in personal glory.

"It's good to be in good shape but it's our collective display that helped us tonight," he said.