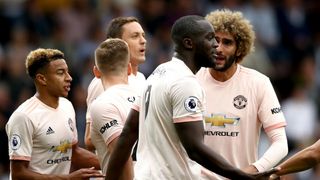 Valencia coach Marcelino Garcia Toral is concerned about the physicality Jose Mourinho has at his disposal and is adamant Manchester United are one of the three most imposing sides in Europe.

Marcelino's side face United at Old Trafford on Tuesday and is readying his team for a battle, having highlighted the physical prowess the Premier League side have.

United are perceived to be in something of a crisis, with Mourinho's team going into the match without a win in three and their manager under increasing pressure.

But, even though Marcelino believes United are going to have certain advantages, he is convinced they have weaknesses at the back.

"They are physically among the three strongest teams in Europe," Marcelino told reporters.

"Offensively they have a lot of potential with players of the highest level, some costing more than £70million who represent their countries.

"They have a strong aerial game and are prepared to fight for everything, both in the Premier League and in the Champions League.

"We will try to counteract their game by working together. They are a team that struggle to defend as a unit, but are very strong in duels.

"Against Juventus we saw what the Champions League us all about, and we have to compete for 90 minutes.

"We need to play the perfect match to win. A club like this, a team like this, one of the most successful coaches in the world, with huge investment and in the best club competition in the world, we can expect them to perform at their highest level.

"We are here to prevent them from performing at their peak."

Although the Ivory Coast international is enduring a difficult moment in England, Marcelino has no doubts about the defender's ability.

"Bailly is a young player who has had injuries that have made it difficult for him to progress in all aspects," he said.

"He needs time to adapt to the Premier League and to United. His individual attributes are beyond doubt. He will get to the top level."