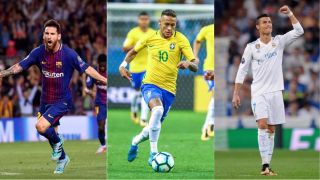 Lionel Messi, Neymar and Cristiano Ronaldo have been named as the finalists for the FIFA Best Men's Player award in 2017.

Real Madrid star Ronaldo won the accolade last year, which was the inaugural edition of the event, French publication L'Equipe having resumed sole control of administering the prestigious Ballon d'Or.

The winner will be announced at the London Palladium on October 23.

Messi was second to Ronaldo in his last season's voting, with Antoine Griezmann third.

Paris Saint-Germain star Neymar was fourth in the Best FIFA 2016 awards, but moves into the top three this year along with his former Barcelona team-mate Messi.

There had been 24 players named on the previous shortlist for his year's honour, with Gianluigi Buffon, Paulo Dybala, Griezmann, Harry Kane, Sergio Ramos and Alexis Sanchez among the names to be cut before the final three.

Ronaldo, also the favourite for the Ballon d'Or, has been heavily tipped to win the FIFA award again after a 2016-17 season campaign which saw him win LaLiga and the Champions League with Madrid.