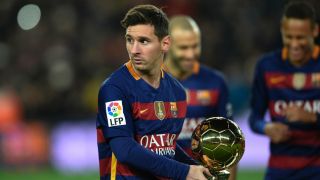 Lionel Messi has missed out on a place in the Ballon d'Or's top three for the first time since 2006.

Messi has won the award five times, dominating the France Football prize with Cristiano Ronaldo for the past decade.

But it was confirmed on Monday that the Barcelona superstar had finished fifth in the voting for the 2018 award.

Luka Modric is the favourite to win this year's Ballon d'Or, the 33-year-old expected to pip Ronaldo to the prize.

The Real Madrid midfielder helped his side win a third consecutive Champions League title and starred in the World Cup.

Croatia reached the final of the tournament for the first time with Modric inspirational, winning the Golden Ball for his efforts.