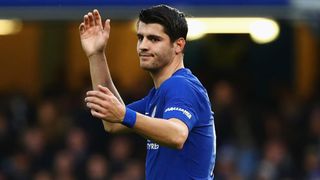 Chelsea striker Alvaro Morata has revealed how regular painkilling injections to treat a mysterious injury contributed to his difficult first season at Chelsea.

The Spain international joined from Real Madrid for a reported club-record fee of close to £60million last July and enjoyed a terrific start to life in England, scoring six goals in his first six Premier League matches.

Morata has only netted once in the top flight since December, though, having struggled to keep his place in Antonio Conte's first-team plans, although he did score in the FA Cup semi-final win over Southampton.

The 25-year-old was diagnosed with a back problem in January that saw him miss four matches, including the EFL Cup semi-final second-leg loss to Arsenal, and he has described the extent to which trying to diagnose and treat the pain compounded a troubled time for him at Stamford Bridge.

"It has been a complicated year for me and I don't think it's been the best year for the team, either," he told Marca.

"I would rather have torn a muscle and be out for three months than not know exactly what I had. I wanted to play and to keep scoring, but I couldn't. I didn't know what I had. The Chelsea doctor did, but we went to see doctors in England and they didn't find that. We went to Germany and what happened there was very difficult for me.

Three important points for us. The best way to get ready for Sunday’s game was winning today. I want to apologize for my reaction when I was sent to the bench, when I fail I get really angry with myself. April 19, 2018

"This was a new team and it was all perfect. We'd beaten Atletico Madrid and we were going well in the Premier League, then it all changed. I had to go several times to Germany to receive a treatment in which they put injections in my back. It hurt a lot and then I would have to return to London to train the next day.

"I think I made a mistake. I should have stopped playing. When you're injured, you're injured, and that's that. You can maybe play one match, but you can't carry on for a month. On top of that, I didn't have much luck during this time. If I'd scored in one of those matches then something would have changed.

"The head is in charge and controls everything. The day before playing against West Ham they told me that I was going to become a father. I wanted to play, but I couldn't even move in the warm-up. I told the doctor to inject me because I had to play. I wanted to dedicate a goal to my future children and, from then on, I entered into a mode where I didn't want to stop because I wanted to demonstrate something. It was all bad.

"I have learned from it and I won't do it again. I suffered. I would arrive home from matches and from training and I had to inject myself a couple of times because I couldn't stand the pain. Nobody told me 'you have a tear here or there'. They scanned me in all of my muscles from the gluteus to the back.

"I'd be eating or dining and suddenly I'd feel sharp pain and have to stop. I couldn't even drive. I wanted to, but nothing. I then returned to play a cup match and it seemed like I was fine and then 'zap', it returned. I didn't say anything. Only the doctor, the coach and my family knew. "