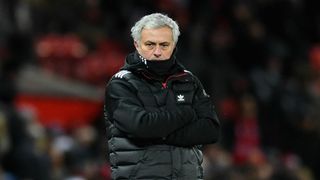 Jose Mourinho let rip at his Manchester United side for being "scared to play" after an FA Cup quarter-final victory over Brighton and Hove Albion on Saturday.

Goals from Romelu Lukaku and Nemanja Matic earned a 2-0 win at Old Trafford to see United through to the semi-finals.

But while Matic was praised for his efforts, having also set up Lukaku for the striker's 25th United goal, and Scott McTominay was excused despite a poor showing, Mourinho was deeply unhappy with the team's performance.

"I prefer to name the good ones," Mourinho told a post-match news conference. "Matic was an island of personality and quality and reaction to the defeat of last Tuesday. Of course, not surrounded by water, surrounded by other people that did a positive job.

"For example, Scott played the worst match since he played with me in the first team. But he is a Manchester United player for sure because he is a player that made mistakes, passed the ball so bad tonight, lost so many passes.

"But a few other guys, I saw them scared to play.

"When you play for Manchester United, supporters always expect you to win trophies - we will fight until the end."Well played, Nemanja - tonight's Man of the Match! March 17, 2018

Paul Pogba and Alexis Sanchez were unused substitutes against Brighton, with United scoring their goals from the only two shots on target they recorded in the game.

Mourinho was criticised for perceived negative tactics after United suffered a surprise Champions League last-16 exit at the hands of Sevilla on Tuesday, but the Portuguese said his players failed to follow instructions against Brighton.

"When it is dark and cold, and in football that means a period of bad results or a bad result like what happened to us a couple of days ago, not everybody has the confidence and the personality to play really - because to be on the pitch and touch the ball every five minutes, anyone can do it, but to be on the pitch and say 'give me the ball because I want to play', that is a little bit more difficult and not everyone were able to do it."