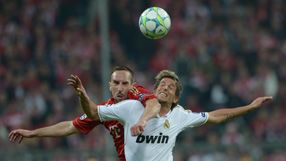 After falling behind to a 17th-minute Franck Ribery strike in the semi-final first leg in Germany, Real battled back to 1-1 when Mesut Ozil tapped in what could prove a priceless away goal eight minutes after the break at the Allianz Arena.

Instead of going in for the kill, Mourinho appeared willing to settle for a draw and hauled off creative pair Ozil and Angel di Maria, replacing them with full-back Marcelo and defensive midfielder Esteban Granero.

Brazilian Kaka, a former World Player of the Year and the natural replacement for Ozil if the German was tiring, was left on the bench.

It might have worked out, securing a slight advantage for next week's second leg in Madrid, but for another dreadful performance from Mourinho's Portuguese compatriot Coentrao, for whom Real paid Benfica 30 million euros.

Coentrao was unable to cope with tricky Bayern forwards Ribery and Arjen Robben and allowed Philipp Lahm to skip past him and cross for Mario Gomez's 90th-minute winner, sealing Real's first defeat in Europe's elite club competition this season.

Although he was given unequivocal backing by his coach and team-mates, the latest below-par performance from the 24-year-old was rubbished in the Spanish sports media and he was ridiculed on Twitter.

Daily Marca noted that it was Coentrao, who was criticised recently after being photographed smoking in public, who conceded the free-kick that allowed CSKA Moscow to score a late equaliser in their last-16 first leg in February.

"The 30-million-euro full-back saved the best until last [against Bayern] when he was very late closing down Lahm, who was able to cross under no pressure for Mario Gomez to score," the paper wrote sarcastically.

It also speculated whether the Benfica fans had erected a statue of their club president for convincing Real to pay so much for the Portuguese international, who had an unsuccessful stint on loan at La Liga side Real Zaragoza in the 2008/09 season.

Coentrao's team-mates preferred to focus on the positives from Tuesday's game as they prepared for Saturday's La Liga 'Clasico' at bitter rivals Barcelona.

Centre-back Pepe, another Portuguese, said Real's "quality" should see them through to next month's final, also in Munich, where they would meet holders Barca or Premier League side Chelsea, who play their first leg in London on Wednesday.

"We believe in our strengths and I am convinced we will get to the final," Ozil, who plays in the German national team with many of the Bayern players, told reporters.

"I am a bit sad about the defeat but I have a positive feeling," the former Werder Bremen player added. "We'll meet again in Munich."

Bayern coach Jupp Heynckes, who led Real to the Champions League title in 1998, will have noted Coentrao's weaknesses and the Portuguese can expect another torrid time in Wednesday's second leg - if he is selected.