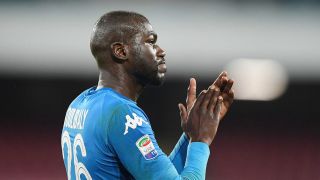 Kalidou Koulibaly was the subject of a €100million offer from a Premier League club, according to Napoli president Aurelio De Laurentiis.

The centre-back, who played all three games at the World Cup for his country, has long been a reported transfer target for Chelsea and Manchester United.

De Laurentiis, though, is adamant Koulibaly will not be allowed to leave Napoli.

"It's true, we had a €100m bid from the Premier League for Koulibaly, but we're not negotiating his sale," De Laurentiis told Radio Kiss Kiss.

"He's a very good person and we've never had problems with him."

Alex underwent surgery at the Pineta Grande Clinic today to reduce his left forearm fracture. A small plate was inserted for primary stability to aid the healing process and decrease immobilisation time.July 12, 2018

Napoli are considering Guillermo Ochoa or Francesco Bardi as replacements for goalkeeper Alex Meret, who broke his arm in training six days after joining the club.

"They're two real possibilities on the market," De Laurentiis added. "We want to give Meret the chance to recover without pushing him. He's a young lad and we can't put pressure on him."