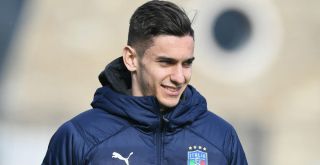 Napoli should make a move for Italy Under-21 international Alex Meret, according to former Inter goalkeeper Walter Zenga.

The Serie A runners-up are in the market for a new goalkeeper ahead of Pepe Reina's imminent move to AC Milan and reports have suggested Napoli are negotiating a deal worth €25million with Udinese for Meret's services.

And Zenga believes that Meret could be the perfect recruit, who will be led by Carlo Ancelotti in 2018-19.

"I’ve seen him live and he’s impressive. He has a physical presence, he dominates the area and has personality, coolness and technique. He has everything," Zenga told Gazzetta Dello Sport.

"If I were Napoli I’d take Meret, with an experienced one behind him to guide him. Reina would have been perfect but maybe Cech, why not?"

Zenga also spoke highly of other goalkeeping stars currently shining in Italian football, although he believes Brazil have improved their stock between the sticks in recent years.

"There are other nations which have improved, such as Brazil. Alisson is a phenomenon, but Ederson isn’t bad either," Zenga added.

"Italy remains the best though, yes. One of our goalkeepers has never had problems in a foreign league.

"Everything has already been said about Buffon and Donnarumma. Then there’s the progress of [Mattia] Perin, the personality of [Alessio] Cragno, the talent of Meret."