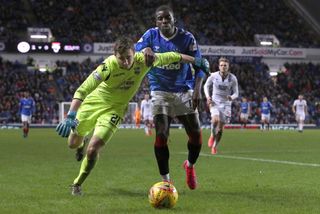 Nathan Baxter admits watching some of his Chelsea youth-team colleagues play for the first team is inspiring.

But the goalkeeper is too focused on helping Ross County achieve their targets to start getting distracted by his friends’ success.

The 21-year-old won the FA Youth Cup in 2016 alongside current Chelsea first-team players such as Mason Mount and Tammy Abraham.

But Baxter is making steady progress himself on loan at County, making 11 appearances after recovering from a shoulder problem.

“We all speak about our experiences and the different paths we are on, and chat as mates. But we are all in different parts of the country and sometimes the world.

“It gives you inspiration to know that you have had the same upbringing and have played football since the age of eight with lads who are playing every week in the Premier League.

“That’s my goal in the future, to play for the first team.

“I am fully aware in football that if you look too far ahead you will be found out. I have always taken it week by week.

“It’s great to see the lads perform so well for the first team and I watch as much as I can but my priority now is on to Kilmarnock.”

Chelsea are likely to have a representative at Rugby Park on Saturday – a scout travelled to Dingwall on Boxing Day to watch Baxter play.

“They have come pretty much every week to watch me,” he said. “It’s good as a player to feel like I am not isolated and they are watching me, because ultimately my dream is to play for the first team.

“First and foremost I am a County player now, I don’t see myself as a loanee.

“It’s nice they come to watch me and I get regular feedback but my priority is making sure I perform here.”

Baxter impressed at Yeovil last season having had earlier spells in non-league football, and feels playing in the Ladbrokes Premiership is a further step. The 6ft 3in keeper has faced Celtic and Rangers in the past week.

“This is my fifth loan spell and I have played over 120 games now, but the attraction of coming up and playing these big games is a great experience for me,” he said.

“When I go back to England, my parent club or other potential loan clubs can look at a player who has played in some big stadiums and performed well in that environment.

“It’s been a good experience but it is important now that I continue to play every week and have a positive impact on the side.”