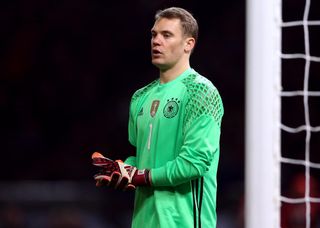 Goalkeeper Manuel Neuer insisted Germany could be pleased with their 2-0 Euro 2020 qualifying win away to Belarus.

Goals in either half from Leroy Sane and Marco Reus earned Germany their second win from their opening two games in Group C, although they missed chances to make the victory more emphatic.

Neuer, who had to be alert to make a smart stop from a Nikita Naumov header in the first half, said: “We are very satisfied.

“We wanted to win away. That’s always tough against low-ranking teams. But we did that well, although we failed to take some chances.”

Reus was also determined to focus on the positives ahead of Tuesday’s home meeting with Estonia.

“Especially in the second half we had good attacks and controlled the game,” he said on the German Football Association website.

“Our goal was to win the two games. We have already won one.”

Joachim Low’s assistant Marcus Sorg took charge of Germany, with Low not in Borisov for the match because of a contused artery requiring hospital treatment.

“First and foremost, the victory is what matters,” Sorg said.