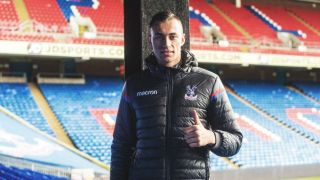 Crystal Palace have signed centre-back Jaroslaw Jach from Zaglebie Lubin and he hopes to use the move to boost his chances of representing Poland at the World Cup.

Jach joined from the Ekstraklasa club for an undisclosed fee on Tuesday and signed a three-and-a-half-year contract at Selhurst Park.

The 23-year-old, who earned his first Poland cap in November, is keen to prove himself in the Premier League and earn a place with his national side in Russia.

"In my life I set myself little steps. On that road with the national team the next step would be going to the World Cup," he told Palace TV.

Jarek says this move is a "dream come true!"Hear more from the new boy on the official app. January 23, 2018

"Of course, I am coming here to fight for the first-team squad to play regularly. I know this club is able to help me to go to the World Cup in Russia.

"I have had good performances, but spots in Poland's squad for the World Cup won't be given for free and there is a tough rivalry in our team. Only with good performances at Palace will I be able to go to Russia.

"This is a dream come true because the Premier League was the league I have followed since I was little and I always wanted to come and play here.

"I am very pleased and I hope that I will be able to help Crystal Palace to stay in the Premier League and perhaps achieve bigger successes."