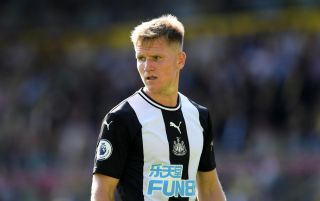 Matt Ritchie does not feel Newcastle head coach Steve Bruce has been given the respect he deserves because of the nature of his arrival at St James’ Park.

Bruce was drafted in by Mike Ashley during the summer with supporters still furious at Rafael Benitez’s departure, and had to attempt to fill the boots of a man who had given a long-frustrated fanbase cause for optimism.

He has spent the months since trying to win over those less than enamoured by his appointment, and there were signs that a thaw may be under way during Tuesday night’s 4-1 FA Cup victory over Rochdale when his name was sung by a section of the crowd on more than one occasion.

Ritchie said: “I wasn’t aware (of the songs) at the time, but it is genuinely fantastic.

“The gaffer came into the job, everybody knows he was probably not received with the amount of respect he deserves.

“He has been in the game a long time and he played at the very top level in Europe with Manchester United. He has won things at the top level.

“He is a really good man and he has this club’s best interests at heart.”

Ritchie made his first start since August in midweek after fighting his way back from an ankle injury he suffered in a challenge by Leicester’s Hamza Choudhury.

It proved a difficult time for the midfielder, who was a key member of Benitez’s side, as his team-mates battled through a testing festive programme amid a fitness crisis.

He is now ready to play his part building on the platform they have established, and is grateful for the attention Bruce paid him during his enforced lay-off.

He said: “For me personally, he has been fantastic to me through a tough spell in my career.

“He did not really know me, but came in when I was injured and was fantastic with man-management.

“I know the other lads feel the same. Newcastle is a very happy camp this season.

“Look, we have had a fantastic start to the season and we are halfway. True, we have not achieved anything yet, but we certainly are on our way to having a good season if we keep our foot on the gas.

“We have to continue to perform the way we have in the first half of the season. The manager deserves a lot of credit for that.”