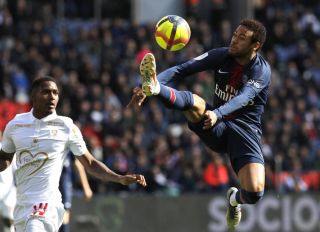 Neymar’s second-half penalty rescued Paris St Germain from another defeat as they were held 1-1 at Parc des Princes by Nice.

Ignatius Ganago fired Nice ahead early in the second half, but Neymar hauled PSG level on the hour when he scored his 50th goal for the French champions from the penalty spot.

Thomas Tuchel’s side, who secured the Ligue 1 title two weeks ago, had lost three of their four previous league games and were beaten in the French Cup final on penalties by Rennes last week.

PSG were without suspended forward Kylian Mbappe following his dismissal in the cup final, while the French football authorities have opened disciplinary proceedings against Neymar, who lashed out at a fan as he walked up the steps to collect his loser’s medal.

The Brazilian appeared not to be affected by his off-field troubles as he went close to giving PSG an early lead, but his volley was brilliantly saved by Benitez.

Benitez was largely responsible for ensuring the first half ended goalless by saving two later efforts from Angel Di Maria.

Adrien Tameze forced PSG goalkeeper Alphonse Areola into a fine save with a shot from outside the area as half-time approached, while Cavani and Di Maria squandered clear-cut first-half chances for the hosts.

Ganago put the home side ahead a minute after the break and team-mate Youcef Atal, who scored a hat-trick in the home win against Guingamp last week, then served warning of his threat by firing just wide.

Atal then set up Allan Saint-Maximin following a swift counter-attack, but the latter’s close-range effort hit the crossbar.

But Nice were undeterred. Saint-Maximin fired just off target and Jean-Victor Makengo’s effort was blocked as the visitors chased a winner.

PSG were awarded another penalty in the third minute of stoppage time after Nice defender Dante’s challenge on Neymar was referred to the video assistant referee.

But Cavani’s spot-kick was saved by Benitez to leave PSG with just one win from their last seven games in all competitions.