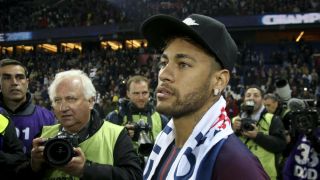 Neymar's future is at Paris Saint-Germain and the Brazilian is tired of speculation over his future, according to club president Nasser Al-Khelaifi.

PSG were inspired to a domestic treble by Neymar, who won the Ligue 1 Player of the Year award in his first season despite missing the last two-and-a-half months with a foot injury.

But reports Neymar's time in the French capital may be short-lived have dogged PSG, with rumours growing that the forward could return to LaLiga by signing for Real Madrid.

Former Barca team-mate Lionel Messi has said it would be "terrible" if Neymar joined Madrid, whose boss Zinedine Zidane added fuel to the fire by suggesting the Brazilian is "compatible" with Cristiano Ronaldo.

But Al-Khelaifi, who has insisted Neymar will "2,000 per cent" be at PSG for the 2018-19 season, has again refuted rumours about his future.

"Neymar is tired of these rumors about his future," Al-Khelaifi told L'Equipe.

"His father told me that his future is in Paris, it's the Spanish media that say it [Neymar is going to Madrid].

"if you believe them, it's worse for you."

"I'm sure he's going to stay," he added. "He's developed with us, he does not intend to leave the club and I'd be surprised if he does, I do not think he has that in mind."