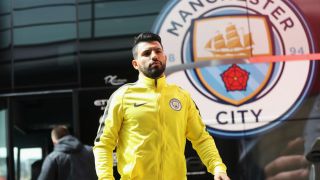 Sergio Aguero will not leave Manchester City and there is no truth in reports he will move to Inter, according to his agent.

Argentine forward Aguero was linked with an exit from City at the end of the season after Pep Guardiola briefly dropped him in favour of Gabriel Jesus.

The 28-year-old was restored to the starting line-up after Jesus sustained a broken metatarsal against Bournemouth in February and took full advantage, netting 13 goals in his subsequent 15 appearances.

Guardiola expressed his delight that Aguero had grown more accustomed to his philosophy over the course of the season, dispelling suggestions of a difficult relationship between the pair.

That is a sentiment echoed by the striker's representative Hernan Reguera.

Asked about interest from Inter and reports he could leave England at the conclusion of the season, Reguera told FCInterNews: "Sergio is happy at Manchester City. He has a contract and wants to respect it.

"There are absolutely none [problems with Guardiola]. Not only are there no negotiations with any other club, there hasn't even been any chat or something close to that effect.

"These things are not true. I repeat: there is nothing."