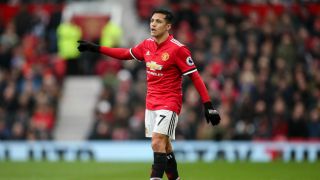 Jose Mourinho is adamant Manchester United will not need any further attacking reinforcements at the end of the season because the signing of Alexis Sanchez means he has all the attackers he wants.

Sanchez joined United in a swap deal with Arsenal that saw Henrikh Mkhitaryan go the other way in January, giving Mourinho further depth in several positions across United's frontline.

The Chile international made his home debut for the club in Saturday's 2-0 win over Huddersfield Town, scoring United's second and generally impressing in an all-round lively performance.

Mourinho has already confirmed that he does not intend to play Sanchez in one specific position, rather highlighting his ability to play anywhere in attack, something he showcased against Huddersfield.

And, given the Portuguese's belief that some of his forwards can fulfill various roles, Mourinho does not think he will need to strengthen that department of his squad again for a while.

"We have Alexis, we have [Romelu] Lukaku, we have Martial, we have [Marcus] Rashford. Rashford can play on the left or on the right. Alexis is exactly the same.

"All of them, apart from Lukaku, can play from behind as a second striker, that's why I say it is bad for you [reporters]. You like to have things to write and things to speculate, especially in the summer [transfer window].

"We have [Juan] Mata, Lukaku, Rashford, Martial and Alexis. I don't want [more] attacking players. For speculation in the summer, you have to go to other areas. Attacking players, I am really happy with.

"We have to improve, not in the quality of the players, but in the dynamic of the team and the efficiency. Even against Huddersfield is a game to score more goals than two."

Mourinho surprised many by dropping Paul Pogba for the Huddersfield win, with some linking that to his early withdrawal against Tottenham on Wednesday.

But the Frenchman's attitude and response impressed Mourinho, who praised Pogba's professionalism.

"You saw the reaction – coming to the pitch with a great desire to play," said Mourinho.

"To be honest, at half-time he was all ready. I can analyse body language. He was showing he was ready, with the physio and starting his warm-up. He showed the way he took it in a very professional way."