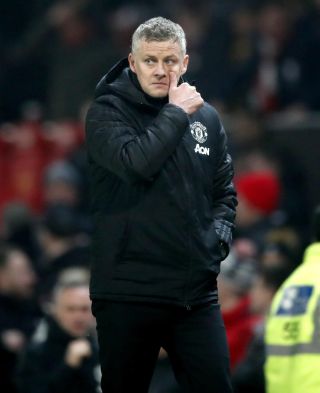 Ole Gunnar Solskjaer believes Manchester United supporters had every right to feel “disillusioned” on a night when anti-Glazer chants provided the backdrop to an embarrassing home loss to Burnley.

Sunday’s defeat to table-topping rivals Liverpool was compounded on Wednesday as the Clarets secured a first victory at Old Trafford since 1962.

Chris Wood opened the scoring and a memorable 2-0 victory was wrapped up in style by hometown favourite Jay Rodriguez, whose stunning strike darkened the mood of the United faithful.

The vast majority of supporters were on their feet when chants of “stand up if you hate Glazers” echoed around Old Trafford, where executive vice-chairman Ed Woodward also copped flak.

Asked how United convince disillusioned fans that things are going to change when there is no evidence of progress on the pitch, United boss Solskjaer said: “Today there wasn’t in the end, because at the end you do feel disillusioned, as you say, because maybe they do.

“But for us we’ve just got to stick to our values, stick to our beliefs and knowing that there’s no use feeling sorry for yourself.

“You’ve got to go out there with the same commitment tomorrow, the day after, get ready for Sunday.

“We know we’ve had X amount of games since the beginning of December and they are very stretched.

“Some of these have probably played more than they should have and expected, more mentally than physically. I think they need the mid-season break.

“We just need to get over that line, not get these three games out of the way but look forward to Sunday, FA Cup against who knows who still, and there’s a chance then to get some belief back.”

A trip to Watford or Tranmere lies in wait this weekend in an FA Cup fourth-round tie that is swiftly followed by the Carabao Cup semi-final second leg at Manchester City.

Few expects United to overturn the 3-1 first-leg loss to Pep Guardiola’s men, especially given their display against Burnley.

“The reasons (for the defeat) were we didn’t play well enough,” Solskjaer said. “They scored from their chances, we didn’t take them, so of course it was disappointing.

“Lately we’ve played better in these types of games where we’ve dominated. Today we didn’t get the first goal and that took lots of the belief out of us and you’ve got to say Burnley do make it hard to play against them then.

“So, we’re stretched. Of course, the players are disappointed in there but they’ve given absolutely everything again because the efforts there.”

United are without key players such as Marcus Rashford, Scott McTominay and Paul Pogba through injury at the moment, but Wednesday’s display laid the squad’s shortcomings bare.

Reinforcements in attack and midfield, where Sporting’s Bruno Fernandes is a target, look crucial at this stage, but the January transfer deadline is looming large.

“We are working to improve and get players in and hopefully we can get something over the line,” Solskjaer said.

“I think everyone can see that these players are being stretched. They are stretched and I have got absolutely no complaints on any of them because they give absolutely everything they’ve got.”

The final whistle was met by boos around Old Trafford, but a corner of Burnley fans could not have been happier with their side’s first win at United since 1962.

“I think we’ve worked very hard over the years to get some big nights, big moments on behalf of the club side of things and for the players,” United manager Sean Dyche said. “Some real historical moments.

“But I think there’s still something really special about this club and about winning here, and for our fans of course as well.

“Close the last couple of seasons with 2-2s and they’ve come back.

“Once we got our noses in front, we handled the game, which is not easy here, they’ve only lost once here this season.