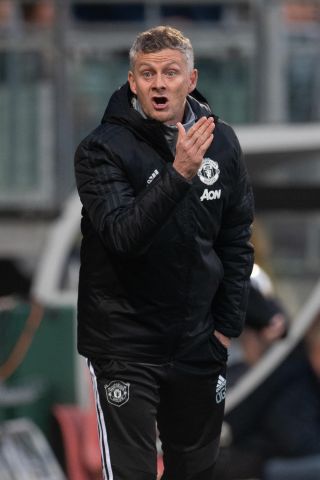 Ole Gunnar Solskjaer claimed to be “very pleased” with his players despite Manchester United’s winless away record stretching to a 10th match against AZ Alkmaar.

The wait for a first triumph on the road since March’s remarkable Champions League victory over Paris St Germain continued with a tepid Europa League display on ADO Den Haag’s plastic pitch.

The artificial surface and number of changes did not help United, but the lack of creativity, coherence and cutting edge was an even bigger issue as they rode their luck to secure a 0-0 draw against AZ.

Mason Greenwood saw a close-range effort blocked but the statistics showed that Solskjaer’s side failed to muster a shot on target, while their current winless streak on the road is their worst such run since going 11 without a victory in 1989.

Yet, despite all that, Solskjaer gave his side’s performance in Holland the thumbs up.

“It’s a good point away from home against good, difficult opponents, very difficult surface,” he said.

“They beat Feyenoord 3-0 away from home just now. We made many changes and I’m very pleased.

“Of course, it should’ve been a win – I am fed up of talking about penalties we should have had. Arsenal on Monday and now. That’s a penalty 101 times out of 100. You cannot make that decision wrong in football.”

Solskjaer was referring to a late challenge that left substitute Marcus Rashford on the deck – something he preferred to focus on rather than United’s dire away form.

“Handball is always a discussion,” he said. “But if you look at the Arsenal one we should have had on Monday that’s not even a discussion because you’ve got so much time to move your hand out of the way.

“The linesman today can look straight at the tackle on Marcus and he just wipes his foot off the floor, so that’s a bad decision.

“Unfortunately for us we didn’t get it, so there’s no point me complaining, which I don’t like doing. But there will come a point when these decisions will turn out our way. That’s always my positive belief.”

Pushed on United’s poor away form, Solskjaer added: “Today was the decision of the referee. It should have been a penalty. We could have been sat here smiling.

“Of course, there’s many games that we should have, could have won away from home. I don’t think that’s an issue.

“Today is a good away point and in the group if you get a point away, you win at home, you go through.”

It was a positive outlook on a frustrating night that was compounded by substitute Jesse Lingard being forced off with a hamstring complaint, just hours after being dropped by England.

“He tweaked his hamstring, so we didn’t feel he could risk it so hopefully it’s not too bad,” Solskjaer said.

One of the only positives in The Hague was the promising full debut of 19-year-old academy graduate Brandon Williams at left-back.

“Today I’m pleased with the boys,” he said. “The debut of Brandon, fantastic.

“It was a good performance,” he said. “It doesn’t matter what team they put out – they’re still a top Premier League side. That said, we had enough chances to maybe get a bit more.”