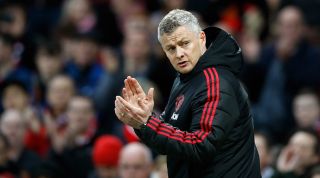 Manchester United’s uphill battle against Paris Saint Germain is set to be made all the more difficult by up to 10 absentees, with Ole Gunnar Solskjaer confirming Anthony Martial will be among those missing for Wednesday’s crucial Champions League clash.

Unbeaten on the domestic front since the 1999 treble hero took caretaker charge in December, the only blot on the interim manager’s copybook is last month’s 2-0 last-16 first leg loss to the perennial Ligue 1 champions at Old Trafford.

Presnel Kimpembe and Kylian Mbappe did the damage and those away goals mean United are available at 18-1 with bookmakers to progress to the quarter-finals.

Those odds may lengthen when United’s list of absentees becomes clear.

France’s World Cup-winning midfielder Paul Pogba is banned after his first-leg sending off, while Solskjaer fears the worst when it comes to United’s lengthy injury list that is set to include Martial due to a groin complaint.

Asked if any of the injured players would be fit to face PSG, he said: “Not really, no. It doesn’t look like it. No, I don’t think we can risk it (playing Martial). He has not been training yet so I don’t think so.”

That list looks to have grown to 10 after Alexis Sanchez was forced off midway through Saturday’s 3-2 comeback win against Southampton. The forward was seen limping out of Old Trafford seemingly wearing strapping on his right leg.

Despite that latest setback, the manner of the weekend win acts as a timely shot in the arm to a United side that heads to France with hope and positivity.

“I have to say, they are confident going into the game knowing that we are 2-0 down,” Solskjaer said.

“We know it is going to be difficult, we played them here and they are a good team, and we have got loads of injuries, there’s a few boys here that will want to be part of it.

“We have got to go for it. We have a mountain to climb. We have quality players. Let’s see how many we have got, though. That maybe is the biggest thing.”

Still, Solskjaer pledged to fight at PSG and try to secure a famous away win akin to the semi-final triumph that saw Juventus beaten 3-2 on the way to the treble in 1999.

“But as soon as you get that one goal away from home we were in the ascendancy, and then when we got to 2-2 suddenly we were through and they had to panic, so that’s it for us.

“We have to get goals in that game. If we get an early one, then suddenly we are in with a shout.”

While United focus on continental matters, relegation-threatened Saints will look to build on their positive Old Trafford display when Tottenham visit next weekend.

Yan Valery opened the scoring for Southampton in stunning fashion but ultimately left with nothing aside from compatriot Pogba’s shirt, yet the 20-year-old remained strikingly upbeat.

“It’s mad and to do it at Old Trafford as well,” he said after scoring his first senior goal.

“I really hoped we would have had at least one point. It was good to score, but I would have preferred it if we won.

“The manager talked to us, and we are obviously disappointed, but he’s happy that we gave him everything.”