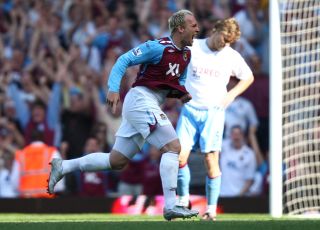 On this day in 2006 West Ham striker Dean Ashton broke his ankle in training with England following his first call-up to the national squad.

The injury eventually forced him to retire from the game aged just 26.

Ashton began his career with Crewe and a tally of 74 goals in 177 matches secured a move to Norwich.

His form for the Canaries prompted West Ham to make a £7million swoop in January 2006, and Ashton went on to help his new side reach the FA Cup final.

He scored twice in the quarter-final against Manchester City and was on the scoresheet in the final, although Liverpool won on penalties following a memorable 3-3 draw.

That summer Ashton broke his left ankle while training with England ahead of a friendly against Greece, ruling him out for the whole of the next season.

He returned to make 35 appearances in 2007-08 and made his England debut the following June, two years after his first call-up, against Trinidad and Tobago. It was Ashton’s only appearance for the national side.

An injury to the same ankle in training in September 2008 ruled Ashton out for the season and West Ham announced his retirement in December 2009.