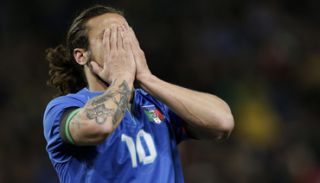 Osvaldo, joint third top scorer in Serie A this season with 16 goals, had been included in a 31-man squad for this week's training camp before becoming the latest victim of coach Cesare Prandelli's strict code of ethics.

FIGC President Giancarlo Abete told the ANSA news agency: "All decisions are made by Prandelli and the spirit of the ethics code, which ensures respectful behaviour in the Italian team, is well-known.

"Osvaldo will remain out of the squad for the Confederations Cup but that does not rule him out of future involvement [with Italy]."

Television cameras caught Osvaldo apparently insulting Roma coach Aurelio Andreazzoli at the end of Sunday's 1-0 defeat by local rivals Lazio. He was left out of the starting lineup and brought on as a substitute for the last 15 minutes.

"There's nothing new in Osvaldo making a scene when the camera is filming him," Andreazzoli told reporters. "But, in private, he's a bit of a whiner. It's his problem, not mine."

Prandelli, who has abandoned Italy's defensive style, has not been afraid to bar players because of bad behaviour with their clubs.

In February, Juventus defender Leonardo Bonucci was left out of the Italy squad after angrily confronting match officials at the end of a Serie A game.

Prandelli has twice barred AS Roma midfielder Daniele De Rossi for his conduct and striker Mario Balotelli also fell foul of the national team's rules when he was at Manchester City.