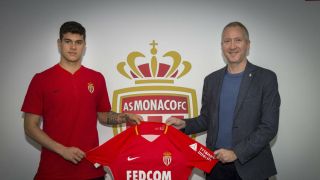 The 16-year-old completed a €25million move from Genoa to Stade Louis II last month despite reports of interest from Serie A giants Juventus.

Pellegri looked on in admiration as Leonardo Jardim's youthful side swept to the French title and reached the semi-finals of the Champions League.

Although much of that vibrant team dispersed during the close-season transfer market, the young striker is motivated by following in the footsteps of Kylian Mbappe.

"I chose this project because they believe a lot in young people and they give them the opportunity to show their qualities," Pellegri told Corriere dello Sport.

"Last season I watched Ligue 1 and Monaco and the team that won the championship had an excellent season in Europe, which is another reason that drove me to come here."

Pellegri added. "There is also the closeness to my family. Monaco is not actually so far from Genoa and, at the same time, it is a high level club in France and abroad.

"I came here to demonstrate my qualities, win my place and progress each day."