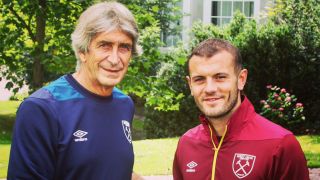 The former Manchester City, Real Madrid and Villareal manager has been busy in the transfer window since joining the Hammers last month, revamping the squad with a number of signings including Jack Wilshere, Lukasz Fabianski and Andriy Yarmolenko.

Pellegrini, 64, has also broken West Ham’s transfer record with the signing of Felipe Anderson from Lazio and believes the funds given to him are a show of intent from the board.

"When I spoke with him he told me he wants to build a new club," he said during his unveiling at the London Stadium.

"He wants to give all the responsibility to me. He asked me to bring a sporting director to the club, said he will support all that I asked and that’s the way we are working.

"It demonstrates David Sullivan wants to build a strong team. Maybe some years ago or last season, the supporters were always complaining about money spent, but when he convinced me to come here – one of the reasons was that he told me he was going to bring good players."

Pellegrini also added that he is relishing the challenge of uniting the fans after protests last season, and hopes they can see the positive changes that are unfolding.

"I know what happened with the Burnley game," he said.

"Fortunately for me, I have never been afraid of anything in my life.

"I am sure the fans will support the club because they are seeing that something is changing inside."

West Ham’s pre-season continues on Wednesday when they travel to the Bescot Stadium to play Aston Villa.