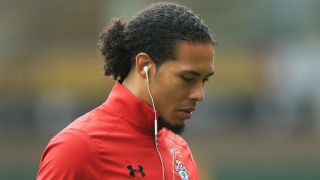 Amid growing speculation over captain Virgil van Dijk's desire to leave, Southampton boss Mauricio Pellegrino has insisted no player is bigger than the team.

Van Dijk handed in a transfer request this week, and will miss Southampton's Premier League opener due to a 'virus', Pellegrino stated.

Despite praising the Dutch defender's playing qualities, the manager has placed emphasis on the collective.

"The problem here is that Virgil is one of the most important players. But there is not one player more important than the 11 players playing together," he said.

"Virgil is an important player but the club was clear from the beginning with the player. We cannot control every situation and Virgil is part of our club because he has a contract.

"The player is clear with his position but we have to keep going because I cannot control the thinking of the player at this moment."

The 26-year-old has been training in isolation since stating his intention to depart St. Mary's.

Showing no compromise, Pellegrino confirmed he will not participate against Swansea City on Saturday.

"He won't be available this weekend as he had some trouble with a virus and has not trained the last two days," Pellegrino said.

"We are expecting him to come back and hopefully he can change his point of view."