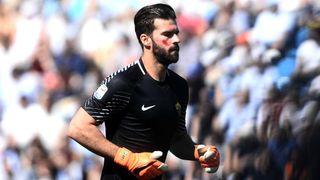 Alisson is a big loss for Roma but the Serie A side can survive just like they did following the high-profile departures of Mohamed Salah and Radja Nainggolan, according to forward Diego Perotti.

Brazil international goalkeeper Alisson is reportedly on the verge of completing a world-record £67million switch to Premier League outfit Liverpool.

Alisson – who is expected to sign a six-year contract with the Champions League runners-up – conceded just 28 goals in 37 Serie A appearances last term as Roma finished third.

The 25-year-old also played a starring role in Roma's remarkable run to the Champions League semi-finals, which was ended by Liverpool.

"He [Alisson] was a really important goalkeeper for us and his saves rescued a lot of points and games last season, but that is football," Perotti told Sky Sport Italia.

"I will say that a club never acts to damage itself, as every move is made to improve the team overall. We'll see how it goes at the end of the season.

"Admittedly, Alisson is a big loss for us, because he's a great guy, was a strong part of the locker room dynamic and we're sorry to see him go, but life is like that.

"It happened with Salah and Nainggolan, Roma continued and will carry on, so we must do just as well as last season."

It has been another busy off-season for Roma, who have signed Javier Pastore, Justin Kluivert, Ante Coric, Davide Santon, Nicolo Zaniolo, William Bianda and Antonio Mirante.