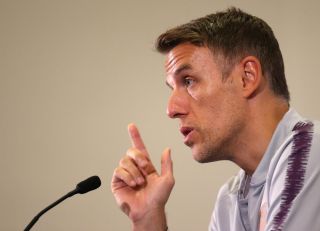 Phil Neville is calling on the “football community” to boycott social media platforms until they do more to tackle the discriminatory abuse directed at players.

Pogba’s treatment prompted a rapid response from his club, which issued a strong statement on Tuesday morning to condemn the abuse and urge social media companies “to take action”.

The French star’s teammates Marcus Rashford and Jesse Lingard have both tweeted their support, too, while United defender Harry Maguire has suggested that people should only be able to open social media accounts if they provide proof of identity.

England Women’s manager Neville, who played nearly 400 games for United, agrees with Maguire but believes companies like Twitter will only act if they are forced to do so.

Speaking to reporters at St George’s Park, the Lionesses boss said the most recent outbreak of overt racism on social media shows the problem is “not going away” despite the positive work being done by anti-discrimination groups such as Kick It Out and the football authorities.

“I think we probably have to take drastic measures now as a football community – I’ve had it with my players on social media, the Premier League stars and the Championship have had it,” said Neville.

Manchester United is a family. @paulpogba is a huge part of that family. You attack him you attack us all… @ManUtdhttps://t.co/PgalnFQMeu— Marcus Rashford (@MarcusRashford) August 20, 2019

Whether enough broadcasters, clubs, leagues, players and sponsors would avoid social media for so long is debatable but the Professional Footballers’ Association did organise a successful boycott in April following a spate of racist incidents targeting Danny Rose and Raheem Sterling.

Neville said his players are regularly subjected to abuse online and he reminded the room of the appalling death and rape threats that were sent to Karen Carney following a Champions League game between Chelsea and Fiorentina last year.

Disgusting. Social media need to do something about it… Every account that is opened should be verified by a passport/driving licence. Stop these pathetic trolls making numerous accounts to abuse people. @Twitter@instagramhttps://t.co/bzow073aTw— Harry Maguire (@HarryMaguire93) August 20, 2019

“Nothing gets done about it – that’s why I’ve lost faith in social media companies.”

Kick It Out has been talking about the rise of discrimination on social media for years and has repeatedly called on Facebook, Twitter and others to take down offensive posts more quickly, block accounts and report cases to the police.

Our statement on the latest unwarranted and vile racist abuse sent to players on social media.#KickItOutpic.twitter.com/XHoNBJQnca— Kick It Out (@kickitout) August 20, 2019

In a statement in response to the latest incidents, the charity said: “The number of posts such as these since the start of the season further highlights how discriminatory abuse online is out of control.

“Without immediate and the strongest possible action these cowardly acts will continue to grow.”

United’s statement suggested they will act decisively as it said the club will “work to identify the few involved in these incidents and take the strongest course of action available to us”.

In a statement released to PA, a Football Association spokesperson said: “Discrimination, in all its forms, is entirely unacceptable.

The abuse of Paul Pogba is a disgrace. No place for this vile racism and social media should act swiftly to take it down (that means you, @Twitter). #SayNoToRacism#KickItOut#StandUptoRacism— Diane Abbott (@HackneyAbbott) August 20, 2019

“We look forward to working with both government and social media platforms to drive this forward.”

The new sports minister Nigel Adams told PA: “Racism must never be tolerated. The football season is only a few weeks old and yet we’ve already witnessed sickening examples of racist abuse against players.

“The government and the football authorities are completely committed to helping stamp out discrimination from the game.

“We have been clear that social media companies must do more and the government will hold them to account.”