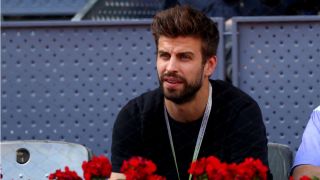 Barcelona defender Gerard Pique has spoken to Dani Carvajal since Real Madrid's LaLiga title celebrations and insists the new Spanish champions have nothing to apologise for.

Pique was the subject of an ill-mannered chant from some Madrid players and supporters - which was at one stage led by Carvajal - as they celebrated winning the league title at Cibeles after Sunday's 2-0 victory over Malaga.

The Barca star has regularly had verbal clashes with his fierce rivals, but on his return from a trip to Italy he stressed that on this occasion he had no problem with Zinedine Zidane's side revelling in their triumph.

"No, I'm not offended at all," Pique told reporters as he returned to begin preparations for Saturday's Copa del Rey final against Alaves.

"No one from Madrid has to apologise to me. I have already spoken to Dani and it is all fine.

"It is totally normal, they were happy at winning the league and that is that – they had to celebrate."

Madrid's league success was their first in five years and gives them the possibility of winning a famous double if they can defeat Juventus in next weekend's Champions League final.